Though particle counting is reported as an actual count of the number of particles (of a given size, per ml of fluid), most specifications and limits simply refer to ISO codes. The ISO codes, according to the ISO 4406:1999 standard, relate to only three different ranges of particles, ≥4 µm/≥6 µm/≥14 µm.

To convert the particle count into an ISO code, please refer to the example below. The original particle count is in the right-hand table, and the ISO codes are in the left-hand table. For each progressively higher ISO code, both the quantity and range of particles doubles. 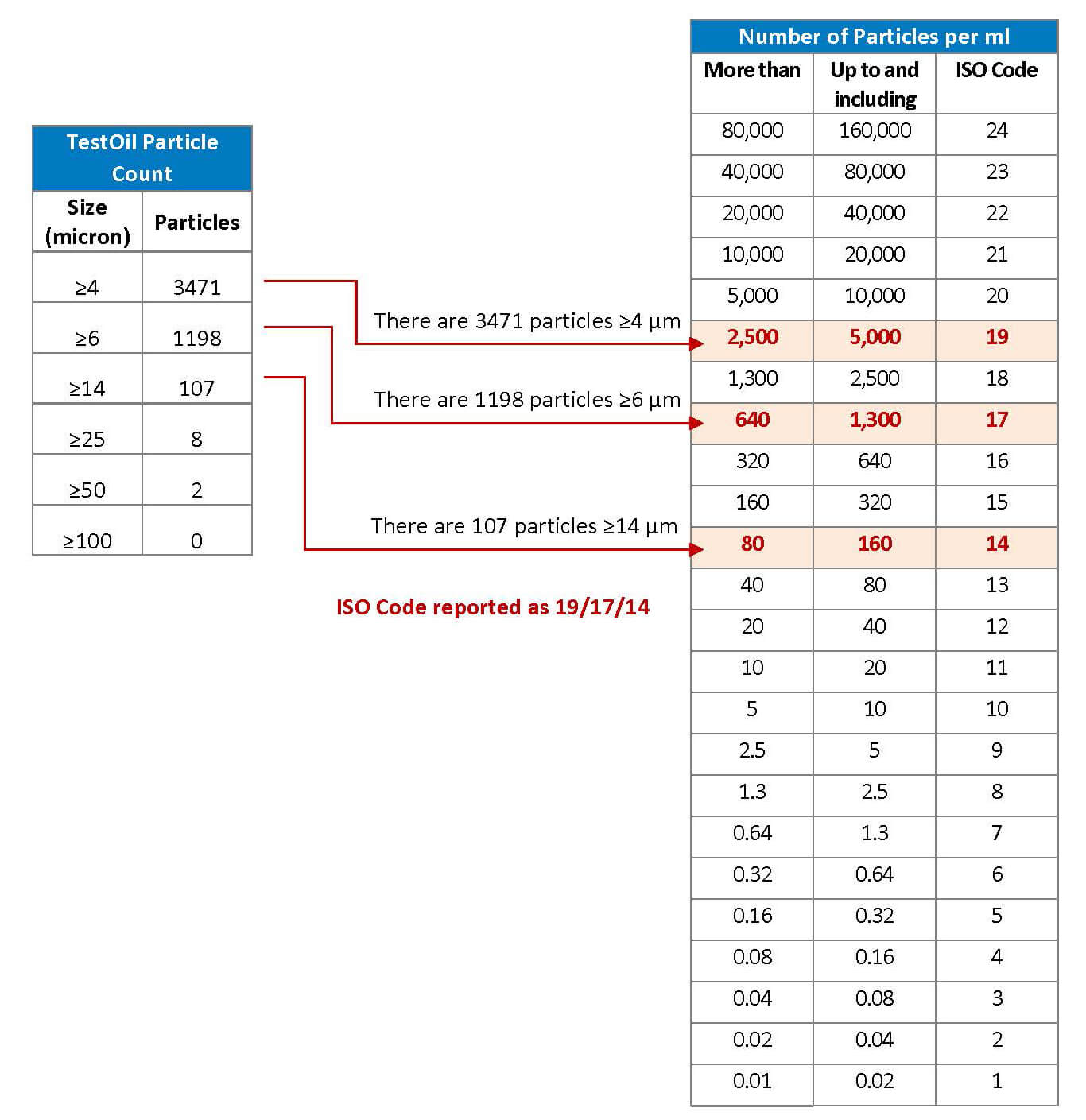 The essential problem with interpreting particle counts is that the values do not seem tangible, i.e. it is difficult to translate something like 3471 particles ≥4 µm into a physical quantity. By coding the results all that seems to happen is that one set of numbers is converted into a different set of numbers with less resolution, meaning they are simply grouped into broad ranges, but remain difficult to translate to a physical quantity.

According to a study performed by Caterpillar, it takes approximately ½ teaspoon of particulate to contamination a 55 gallon drum of oil to an ISO code of 18/16/13. Returning to the example above, where 19/17/14 is one ISO code higher than 18/16/13 and therefore considered twice as contaminated, the result can be interpreted as approximately 1 teaspoon of particulate per 55 gallons of fluid.

Considering new oil cleanliness is typically around an ISO code of 20/19/16 (give or take a code), which is 2 or 3 codes higher than the 18/16/13 reference, it can be appreciated that this equates to between 2 and 4 teaspoons of particulate in every drum of new oil, as received. This should serve as a reminder in the need to pre-filter lubricants for most applications.

Evan is a Certified Lubrication Specialist. Evan has extensive experience training tradesmen and professionals in a variety of fields including: lubrication fundamentals, contamination control, condition monitoring, RCM/FMEA and used oil analysis. Evan has been a member of STLE for over 20 years, serving as Chair of the Alberta Section for 8 years, and also as an instructor of the Condition Monitoring course at STLE Annual Meetings. Currently, Evan has Editor of TLT Magazine, and have served as the Editor for The STLE Alberta Section’s Basic Handbook of Lubrication – Third Edition, and contributed as one of the editors for STLE/CRC’s Handbook of Lubrication and Tribology, Volume II: Theory and Design, Second Edition. Evan has published several technical papers and am also a member in good standing of API and ASTM.