Infrared Thermography as a Diagnostic Tool for Roofing Systems

Over the past 20 years, infrared thermography has become a popular test technique for helping to detect latent moisture within flat and low-slope roofing systems. Thermography is typically used for condition assessment and forensic studies, as well as quality assurance inspections of new installations, repairs, and retrofits. Performed properly, thermography can provide valuable insights into the condition of a roofing system by graphically documenting the extent and location of subsurface moisture within a roof.

Infrared inspections of roofing systems employ a thermal imager, often referred to as an infrared camera, to detect, display, and document thermal patterns across the surface of the roof. In order to be effective, the roofing system must contain either an insulating deck or insulation sandwiched between the roof deck and the waterproofing membrane. For either construction, the insulation must be in continuous contact with the underside of the membrane. Thermal imaging may be applied to both built-up and single-ply roofing systems; roof membranes may be smooth or gravel-surfaced provided that the gravel is pea sized or smaller. Thermal imaging may also be successfully applied to coated or uncoated spray-applied polyurethane roofing systems.

Water within the insulation of an insulated roof changes the thermal properties of the roof known as thermal conductivity and thermal capacitance. Since roofing systems do not produce heat as a byproduct of their normal function, it is possible to take advantage of changes in either thermal capacitance or thermal conductance by carefully selecting the time at which the infrared inspection will be conducted.

During warm weather, thermographers rely on thermal capacitance to drive the inspection. Due to its higher mass, wet insulation will absorb and store heat during the daytime hours on a sunny day. As the roof cools during the evening hours, areas of the roof containing wet insulation cool more slowly than those with dry insulation causing warm thermal patterns associated with wet insulation to be detectable for up to several hours after sunset. 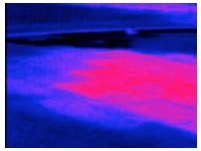 There are many factors that influence thermal patterns across a roof. Because a thermal imager is not a moisture meter, all thermal data must be verified through invasive testing. Such testing can consist of core samples or moisture meter readings obtained from a moisture meter equipped with a penetrating pin-type sensor. To help ensure inspection accuracy, invasive testing should be performed for areas of the roof exhibiting thermal anomalies as well as for areas with uniform thermal patterns.

In order to help ensure accurate data collection, subject roof surfaces should be clean and dry at sunrise on the day of the inspection. In most cases, infrared inspections of roofing systems are conducted after sunset following a clear day with little or no wind. The actual time at which an accurate infrared inspection can be commenced will depend upon a number of factors including, but not limited to: the amount of solar loading during the daytime, rate of air temperature change in the afternoon, evening cloud cover, and wind speed at the time of the inspection.

During the infrared inspection, thermal patterns that cannot be explained in terms of construction details, roof surface conditions, or external influences such as air exhausts are considered thermal anomalies. For walkover inspections, it is customary to outline the perimeter of thermal anomalies with spray paint and record them with the thermal imager. Should invasive verification be possible at the time of the infrared inspection, the thermographer can outline only those areas of the roof that are confirmed to contain wet insulation.

For aerial inspections, thermal imagery is generally recorded to video files or to still images taken with the thermal imager. This imagery is then analyzed after the aerial mission has been completed. Areas of the roof found to contain thermal anomalies may then be invasively tested and a written report of findings compiled.

Upon completion of an infrared inspection, it is customary to compile a written report of findings. Accepted industry practice and published standards require that the written report contains thermal images and corresponding daylight photographs along with a drawing showing the size and location of moisture suspect areas.

During the past ten years, the cost of thermal imaging equipment has fallen drastically due to advances in technology. Once costing tens of thousands of dollars, thermal imagers have become quite affordable with entry-level systems now priced at under $1000. Because the accuracy of an infrared inspection can be greatly influenced by the thermal imager utilized, it’s imperative to select the proper equipment.

Standards published by ASTM International and Infraspection Institute both address infrared equipment selection. Infraspection Institute’s Standard for Infrared Inspection of Insulated Roofs calls for infrared imager detector size, often referred to as resolution, to be at least 120 x 120 pixels. The imager must also have real-time control of level and gain settings. Thermal imagers that do not meet these requirements are likely to overlook thermal anomalies that are small in size or have small temperature differentials.

Another important consideration for equipment selection is the imager wavelength. For walkover inspections of smooth-surfaced roofs, a shortwave (2 – 5.6 microns) thermal imager is recommended in order to minimize reflections from nearby structures and the nighttime sky. When present, such reflections can cause latent moisture to go completely undetected. The downside for shortwave thermal imagers is equipment cost. Compared to today’s longwave thermal imagers, shortwave systems can be quite expensive with new equipment exceeding $50,000 per imager.

Infrared inspections have been performed from manned aircraft for well over 30 years. Given the altitude that such missions are conducted from, thermal imagers were often high-resolution units similar to those used by military and law enforcement personnel. The resulting imagery was often remarkably clear and capable of detecting thermal anomalies measuring as little as one square foot in size.

Advances in technology have allowed compact thermal imaging sensors to be paired with several types of lightweight drones. Drones equipped with thermal imagers allow for infrared inspections of roofing systems at a far lower cost than those operated from manned aircraft. Depending upon the aircraft and roofing system, it is often possible to inspect millions of square feet of roofing system in a single evening.

While using drones instead of manned aircraft can allow for greatly reduced costs, there are technological tradeoffs. By far, the biggest difference between drones and their manned aircraft counterparts is optical resolution. Because of this, drones need to be operated at lower altitudes in order to produce usable imagery. Not all drones meet the resolution requirements (120 x 120) set forth in the Infraspection Standard. Since drone operation requires line-of-sight operation, it is usually necessary to physically access the roof during the inspection unlike aerial inspections performed from manned aircraft.

Compared to ground-based inspections, aerial inspections allow for rapid data collection; however, they do have some challenges. Small anomalies are more likely to be missed during aerial inspections. Visually correlating thermal data to roof conditions and outlining of areas of interest are only possible during a walkover inspection. Aerial inspections require licensed pilots for flying the aircraft and may require waivers for flights within areas with restricted airspace. 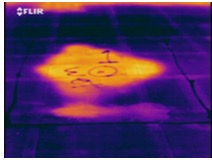 Presently, the majority of infrared inspections of flat roofs continue to be of the walkover type. Such inspections afford an average rate of coverage of 10,000 to 20,000 square feet of roof per hour. Walkover inspections allow for the detection of small anomalies that would be missed during an aerial inspection. It is also possible to mark the location of problem areas directly on the roof surface with spray paint or chalk. For infrared inspections where real-time verification is available, it is possible to mark only moisture-damaged areas thereby saving time and possibly obviating the need for a return visit to the roof.

Infrared inspection of roofs is a combination of both art and science. Although thermal imagers have become more affordable and user-friendly, thermography is not a ‘point and shoot’ technology. The accuracy of an infrared inspection is largely dependent upon a thermographer’s knowledge and skill level. To this end, infrared inspections of flat roofs should be conducted by experienced and certified infrared thermographers who understand building performance and roofing system construction.